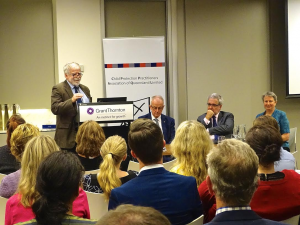 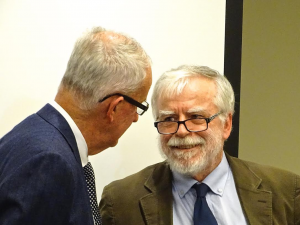 Professor Warwick Middleton, Past President, ISSTD. In presenting the award Prof Middleton stated that the announcement of the Australian Royal Commission was met with high societal expectations and not only did it meet expectations, but actually exceeded them. Professor Middleton pointed out that a core reason for this was that the Royal Commission placed the highest possible emphasis on respect for victims of such abuse and the structures employed flowed from this dynamic. Commissioner Atkinson was very pleased to be a recipient of the ISSTD Award and was keen to pass on to Society members, his appreciation.

ISSTD has awarded the 2018 Media (Written) Award to what is arguably a world first: the Australian Royal Commission into Institutional Response to Child Sexual Abuse. This enquiry represents mankind’s most comprehensive attempt to examine very closely the network of society’s institutions involved in the sexual abuse of children and the manner in which such institutions protect abusers. It was unprecedented in scale and scope. The Australian findings are of direct relevance to all comparable societies. The formidable next step will be for a society to similarly look closely at what happens to children in that other “institution”, the extended family. The ISSTD is aware that many staff worked to ensure the success of the Australian Royal Commission and that many individuals demonstrated personal heroism in contributing essential testimony. It is difficult to single out the numerous people who contributed to this historic achievement. The six Royal Commissioners and the Senior Counsel Assisting the Royal Commission occupied roles that were particularly central to the outstanding success of the venture and they represented for many the public face of the Royal Commission. The ISSTD’s charter makes provision for honoring contributions of non-members of the ISSTD in the general area of trauma and dissociation where such contributions have entered the public domain via the media. In the 35-year history of the ISSTD, the Society has never before given an award to the architects of a national inquiry into aspects of child abuse. The individual members of the Royal Commission and recipients of this award are: • Hon. Justice Peter McClellan AM • Hon. Justice Jennifer Coate • Commissioner Bob Atkinson AO APM • Commissioner Helen Milroy • Commissioner Robert Fitzgerald AM • Commissioner Andrew Murray • Ms. Gail Furness SC 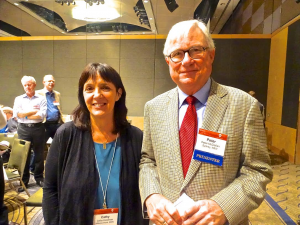 Justice McClellan was a plenary speaker at the ISSTD bi-national regional conference in Sydney in November 2015, which attracted 386 attendees. The Australian Royal Commission, officially conducted between January 11, 2013, and December 15, 2017: • held 8,013 private sessions with abuse survivors, • conducted 57 public hearings over 444 hearing days (involving a total of 1,302 witnesses), and • made 2,575 referrals to authorities (including police). It is an enormous credit to the enterprise, and newsworthy in itself, that the same six Commissioners who had embarked on the challenge were still there at the end – and that support for their work, on behalf of the Australian populace – remained strong throughout. In terms of numbers of victims, the institution which contributed the largest number, was the Catholic Church, and findings regarding this institution are congruent with those pertaining to other churches, as well as schools, sporting organizations, orphanages etc. The full extent of the abuse involving the Catholic Church was revealed in February 2017 when it was announced that seven percent of priests in the Australian Church were accused of sexually abusing children between 1950 and 2010. Commissioners surveyed Catholic Church authorities and found that between 1980 and 2015, 4,444 people reported they had been abused at more than 1,000 Catholic institutions across Australia. The average age of the victims was 10.5 for girls and 11.5 for boys. The average time it took between a victim being abused and reporting it, or seeking redress, was 33 years. The worst-offending institutions, by proportion of their religious staff, were shown to be the orders of brothers, who often run schools and homes for the most vulnerable of children. Over forty per cent of the members of the Brothers of St John of God had allegations of child sexual abuse made against them from 1950 until 2010. For other orders the percentages were:- Christian Brothers (22.0%), Salesians of Don Bosco (21.9%), Marist Brothers (20.4%), De La Salle Brothers (13.8%). The Royal Commission documented child sexual abuse across a wide range of secular and religious institutions. Central to the widely acclaimed success of the Royal Commission, was demonstrable deep respect for victims, many of whom had previously been chronically invalidated and dismissed. A central component of the Commission’s recommendations involved establishing a fair and just system of financial redress for victims, where those institutions who continue to exist and who have resources, make appropriate compensation to their victims. Given the not infrequent difficulties associated with other regional or national inquiries dealing with child sexual abuse, it is apparent that the Australian Royal Commission has set a bench-mark in a highly complex area:in maintaining the confidence of the abused; engaging and maintaining the support of the population in general; in demonstrating how institutions harbor and facilitate organized child sexual abuse; in having real teeth in referring matters to police and other authorities; and in engaging government to take the lead with respect to redress for victims. On learning of his ISSTD Award, Justice Peter McClellan responded by saying, “Please convey my thanks to the Society and my appreciation of the important work you all undertake.” In order to read more about the Royal Commission, the largest Royal Commission in Australia’s history, go to: https://www.childabuseroyalcommission.gov.au Writing in a special issue of Child Abuse & Neglect, Katie Wright and co-authors state, “The Royal Commission is arguably one of Australia’s most highly regarded and successful public inquiries, having developed a model for investigation of institutional abuse that has shaped the approach of other inquiries internationally” (Volume 74, December 2017, Pages 1-9) – https://tinyurl.com/y6wdyep8