Fire is the Greatest Purifier: A Therapist Reflects on Surviving the California Wildfires 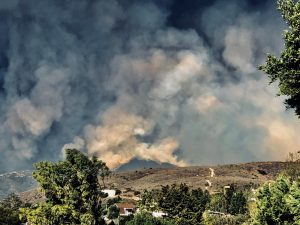 One block from Ericha’s home as she evacuated

I have wondered, before now, if the dystopian stories embedded in our lives and creative culture prepared us or numbed us for disaster. Now, I can say, they do not do either. The day before the fire, I noticed and commented on an odd vacuous energy in the air – as if the oxygen had been removed. My colleague noticed it as well. We both knew about the fires in Thousand Oaks, but neither of us imagined the fires were coming our way with a wall of flames – sometimes 100 feet high – in less than 24 hours. There is a whole mountain range in between us. Fire is the greatest purifier. The fear of fire acts as an accelerant for the psyche, touching the deepest recesses of the primal mind. In the end I had less than two hours to pack and load my car. For some reason, I had not received any disaster alert notifications, neither did my housemate. My city of Malibu text notice did not arrive until I was already on the highway. The firestorm arrived just a few hours after that. The thick wall of toxic smoke arrived before I left. Early Friday morning, I heard loud pounding on my bedroom door, “Wake up, mandatory evacuation. NOW!” My first thought was one of denial, the logic did not make sense. I was not alone in this, it seemed that even the local and experienced firemen were surprised. It took me a few minutes to wake up fully, watch a bit of news, digest the information, and move into action. 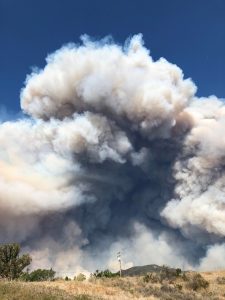 Lara and her husband Michael live on the property and help take care of it. Lara shouted down to me from the floor above and said, “Ericha you need to hurry and get in your car; I can see that the fire just crested the ridge”. I said, “Lara, you need to do the same, you’re a mother with two little girls!” Later, Lara reminded me of my words as she recounted her escape from the fires, after the smoke was so black she could no longer see. I tried to pack as if I might lose everything, with attention to my most immediate needs. My housemate, who had been through more evacuations than I said, “You do not need to pack much, we’ll be back in two days”. Intuitively, I knew this was not accurate. Ultimately, it was twelve days or more before I returned home. Therefore, I packed all of my vitamins and supplements, food from my refrigerator to share, comfort clothes such as my favorite sweats, a few books, my computer and powerpoint lectures duplicated on thumb droves, plus lecture outfits for presentations scheduled for the near future. I threw in a few of my recent paintings that have no monetary value whatsoever. I forgot to include items that I could have sold to get back on my feet in case I lost everything. This was one of my biggest concerns during the evacuation. 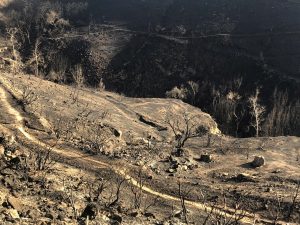 Saturday was the most difficult day. On Saturday I thought I had lost everything, my home and my office. Both my home and my office were located in the firestorm corridor as it blew into Malibu. Saturday, I thought erroneously that the newscasters and film crew were on my street, listening to their commentary and with one look at their videos, I assumed that all I owned was ash and cinder. I also heard incorrect rumors that my office building burned to the ground. The thought that you have lost everything, even if only for one minute, clarifies what you value. Of course, always people and loved ones are first, after that, survivorship. The two items that I knew I needed in order to rebuild my life included my computer and my powerpoint lectures. My fear of survival showed up in a rather amusing way, I took my computer everywhere and did not leave it out of my sight for 12 days. I joked at one dinner gathering with colleagues, “If I could handcuff it to my wrist I would”. Fortunately, they were very tolerant of my trauma related idiosyncrasies. I found that I could not pray, at least not in a traditional manner. I have built almost everything I have from nothing. At age thirty, I quietly left a relationship that frightened me. Without much evidence at all, but trusting my intuition, I walked out of a relationship with a weekend’s worth of clothes. I started over in another city, in another state, with four hundred dollars and my bank accounts suddenly empty. In hindsight, I made the right decision but at the time I felt as if I was flying blind. I now know that I saved my life. 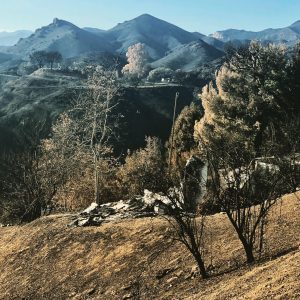 The scars of 34 years ago, scars that have been largely but not completely healed, seemed to rise up with the flames and remind me of how difficult it can be to have absolutely nothing. My prayer was more of a conversation, “God, I cannot do this twice in one lifetime.” Six hundred homes were destroyed in Malibu, a very small town, and many of those homes were close to my office and residence. Too many of my friends and neighbors have lost everything. Many of them are not wealthy, instead, like most of us, they live paycheck to paycheck. Local artist and actor Leigh McCloskey said it so well, “We may not be friends, but we are neighbors,” after some neighbors (with polarized politics) surprised him with heartfelt gifts and support. Twelve days later was my first visit back to Malibu since the fires. A colleague graciously offered to join me for the first visit back. When I entered my office, I made a mandala (circles of healing and community) in the sand tray. My colleague held up her phone for light, while I worked arranging stones and shells. 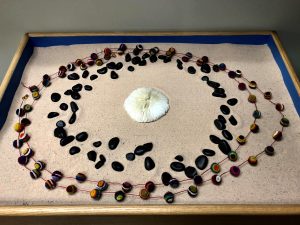 It was my visual prayer of gratitude. Against all odds, my house and my office survived. I am used to seeing miracles in the eyes of my clients, but this one was beyond my expectation. I have not often thought of myself as lucky or blessed. As I was making the tray, my colleague exclaimed, “Ericha, the lights came on!”. For twelve days the power had been turned off, and it was turned back on Tuesday night around 7PM, as I was rejoicing in gratitude. There is much to do. So much of my life and the lives of others have been disrupted. The cell phone service, texts and emails have been interrupted and delayed, clients cannot make it to sessions due to mudslide risks or understandable and new financial concerns. The main post office burned and has been shut down so I don’t have access to most of my mail. My home, and especially my office, still smell like smoke and may hold that lingering reminder for a very long time. Cleaning up ash, while also preparing for a second evacuation for mudslides, is an odd paradox. I am claiming all paradoxes as much as humanly possible. I have been gifted a week long intensive with a talented therapist to process these weeks of trauma and stress in order to help prepare me to help others. Today, my greatest joy is a plan to offer a free art therapy workshop for fire survivors, with two of my colleagues. For now, we plan a mosaic workshop, with found items burned in the fire. It is exactly that isn’t it? If you think about it, we are taking the charred pieces of our lives and fitting them back together in a mosaic, not the same as before, but into another whole.